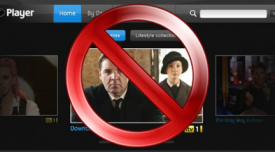 ITV or the independent television channels are the main rival to the BBC for TV viewers in the UK. Known for their quality dramas and sports coverage the ITV channels are funded by advertising.

Comprising of ITV, ITV2, 3 and 4 with CITV for the little ones most of the channel’s output is now also available online via the ITV Player. The service is free to use funded by pre, mid and post roll adverts.

Many programs can be watched ‘live’ at the same time as they are shown and the ITV player also works as a catch-up service for viewers to watch what they have missed.

Some of the most popular programmes on British Television such as Downton Abbey, the X Factor and Champions League football can be watched live via the ITV Player.

That is provided you are a UK resident. The ITV Player can only be watched by UK residents from the UK and they police this by checking the IP address of anyone accessing the website.

So, if you want to watch ITV in the USA you are out of luck…or are you?

To watch ITV in the USA you can use a virtual private network (VPN) service. With a VPN you can log onto the internet via a different country’s server making it appear to any website that you are resident in that country.

Simply connect to the VPN’s UK servers before visiting the ITV player website and you can watch ITV in the USA (or from anywhere else in the world).